A smart woman knows all about her reputation. Joan Jett sang about not giving a damn many years ago but I can’t agree with that. I do LOVE the song, it always reminds me of that film ’10 things I hate about you’ which was based on Taming of the Shrew the Shakespeare play. The song represents more than its lyrics to me, it was something different at the time it came out and Joan Jett really managed to put herself on the map with her rebel heart. She was a real brand and many girls wanted to be like her despite her so the speak bad reputation.

So there are many reputation management courses around but I don’t believe in them. I mention this in the article that appeared in MT last week. 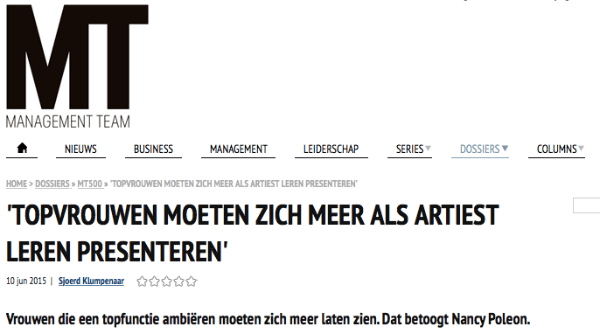 To me it is about being aware of your reputation and determining whether you agree with it. Is there a gap between what you want people to say about you and what they are actually saying? Do you know how you are perceived? Perception is the first chapter in my online e-course because I think it is really important to be perceived the way you want to be perceived. It effects so many things, from whether you get asked for jobs to whether others recommend you.

I was recommended early this month to join an Iamsterdam campaign promoting Amsterdam Business to get more companies to invest in this city (rather then go to London or Berlin). It all really happened so quickly, I got a phonecall from Gemma Broekhuis (she spoke at BrandedU last march) who basically asked me if I could come to the shoot right away. I was there in 1 hour and left 1 hour later. Here is the result of the campaign. I am in the middle of the film (00.44 if you watch it via youtube) and page 2 on the photo campaign as seen below. Superproud to represent Amsterdam with all these great business owners!

My reputation also got me to EY (Ernst & Young), I have been giving several training sessions there about personal branding and have been learning so much about the issues young women have nowadays. Speaking up and letting your voice be heard is still very difficult for women (no matter what age). But what I found is that practice really does make perfect. I have seen many women join my training sessions and be shy and leave them with more confident and real insights to change their situation. Because we make things practical, not just theory or inspiration — I feel women have to do it and practice on eachother. The concept of sisterhood is spreading there aswell ;-).

And I am adding even more members to our sisterhood. From 7th of September the new series BrandedU seminars starts and registration is now open. IF you have never been to one of our seminars believe me you are missing out. But don’t let me convince you please see some real testimonials here.

I will leave you with this video of Angela Ahrendts, now this woman has a really great reputation. In 2012 she was the highest paid CEO in the UK, making $26.3 million. She used to run Burberry but left last year to join Apple. In this video she talks about the importance of findng out who you are.

Speak to you soon!