Hi,
“Workin’ 9 to 5 what a way to make a livin’
Barely gettin’ by, it’s all takin’ and no givin’
They just use your mind and you never get the credit
It’s enough to drive you crazy if you let it”
9 to 5, yeah, they got you where they want you
There’s a better life and you think about it, don’t you?”
Yesterday Dolly Parton turned 70 years old. And she still is a global icon. Dolly wrote ‘I will always love you’ as a parting gift to her then music partner. Since she first wrote and recorded it, she has taken “I Will Always Love You” to the top of the charts many times already. In 1992, Whitney Houston recorded it for the soundtrack of her film, The Bodyguard, and it topped the Billboard Hot 100 for a then-record 14 weeks. It remains one of Parton’s signature songs and the closing number of most of her live shows.
Now most of you will probably have known about this. But what a lot of people don’t know is that she wrote the ‘Working 9-5’ song as part of the same-titled film as a reminder that women are better off helping each other. It was quite a feminist and bold move. Dolly is also a great deliverer of fabulous quotes like the one here below. 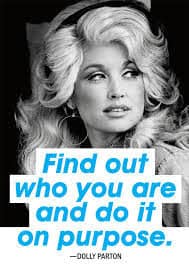 Now the reason I started BrandedU was to help women make themselves more visible as to further their career ambitions. And believe it or not I was still shocked to read the following in an interview:
“According to the World Economic Forum (WEF) the economic gap between men and women has closed by a tiny 3% over the past decade, with the average woman now earning what the average man did back in 2006. Furthermore, the report predicts that it will take the world another 117 years — until 2133 — to close the gap entirely.”
You can read more about this here.
All I can say is there is still a lot of work we need to do. And so we need to keep going with our personal development and keep improving on those qualities we deem necessary. I am definitely not demotivated by this news, in fact it has only made me more focused to help women reach their career goals.
So last week I asked you: What do you want to be known for. And I just loved Valerie Betorina’s reply: “I want to be known as the girl from Curacao that shows Antillean women that natural Afro hair is beautiful!” Congrats Valerie you have won the free BrandedU online E-course!
For those who didn’t win you can still join the course for only €75 a month here.
Also don’t forget! If you want to improve your presentation skills: Sign up for our Presenting Comfortably Masterclass with Buffi Duberman, Astrid Rose and myself here. 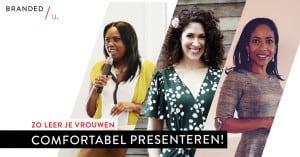